So, a funny thing happened on the way back to the dorm. While walking across the quad, a patch of grey against green caught my eye. Squatting down, I found a baby squirrel spread-eagled on the grass. It was still alive, but a sibling close by was not. Since they were on a major footpath (and the nest above was about 50 or 60 feet up), I took the live one back to my dorm. He was promptly named Larry. 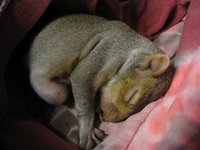 I did a quick overview of his condition. He was furred, mobile, and could urinate on his own, but his eyes were still closed. There was a little blood when he sneezed, but only a small amount -- likely a bloody nose, not from internal bleeding. I put him in an old t-shirt in a shoe box and set that on my laptop (a moderately warm environment), then called Nathou, a wildlife rehabilitator. She gave me some tips on short-term care and later hooked me up with a wildlife rescue person in the area by the name of Heffner. I'm pleased to report that Larry is eating and drinking, and appears to have a decent chance of survival in the wild.