Well, I had a good time over Fall Break. Instead of having my parents drive 9 hours out and back (twice!), Mindy’s parents drove 2 hours out and back (twice) and I stayed at her place in Beaver, PA for the weekend. It was interesting to see the place after hearing her talk about it — having the pieces click into place (“Oh, so that’s the ugly new courthouse, and there’s the pizza place where her brother worked.”). We drove to Pittsburgh to see the Bog Bodies exhibit at the Carnegie that she’s studying for her I.S. 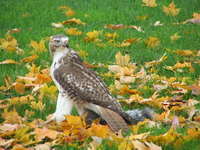 Speaking of dead things, I saw something cool today! The hawk that hangs around Holden caught a large grey squirrel and was eating it in front of a crowd of admirers. I ran back for my camera and managed to get this one shot before my batteries died. There’s something weird going on between my camera and batteries, I’m not sure what. Anyway, this bird is a beauty. As best I can figure, it’s a young red-tailed hawk. It isn’t very skittish (this photo was taken maybe 10-15 feet away, at most), and it had a difficult time manouvering with the squirrel in its talons. After the crowd had left, I sat down to watch it eat for a while. It eventually decided to fly downhill (barely lifting off the ground) and perched in a low branch to finish its meal. I’ll spare you the details in this post.